Last week was my birthday and a good time was had by all.

First we went to the nursery where I broke down and bought a 4 pack of patio tomatoes, a rosemary plant, a mint plant and a sage plant. I wanted to ONLY use seeds this year but there’s no way the tomatoes are going to do anything, the rosemary got crowded out by some crazy oregano, and I never did have any sage or mint plants or seeds. 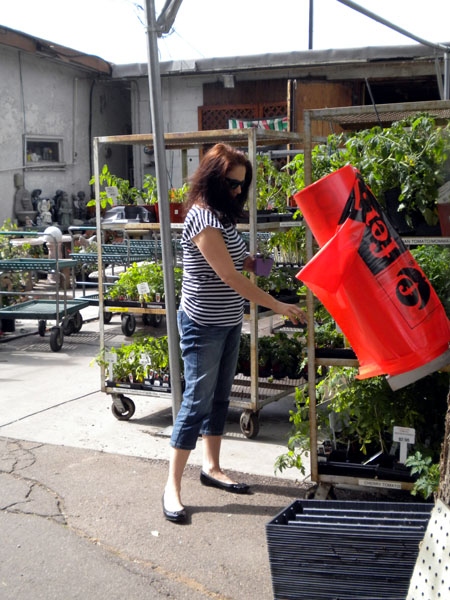 Then we went across the street to a German restaurant where they have a funky bar in the basement and had German beer. I had a hefeweizen (pardon the spelling, I’m too lazy to look it up, you know what I mean) and DM had some other thing that was really good. And now we’ll never have it again because I don’t remember it. BUT they also make a cocktail with it that has sprite in it! OMG that sounds oddly delicious. We’ll have to go back.

Next time maybe we’ll have some snacks. Or maybe not.

After the German place we went to The Blue Star and I had a sangria which was really yummy.

We also had some kind of chips and dip thing which was also very good. And good to have because I was already feeling tipsy.

Then we stopped by home so we could change before we went to dinner. Well, I put on jewelry, heels, and changed into jeans from the capri jeans. I was also feeling lazy as well as tipsy. Not sure what is up with the quality of this picture!

For dinner we went to Pizzeria Rustica and sat right at that table there on the far bottom right of the picture. Heh. Anyhow I’ve been wanting to go there for awhile. DM had Italian beer and I had some red wine in a trendy stemless wine glass which is for sure not my fave. The glass, not the wine. The wine was very good.

We also has some antipasto which consisted of marinated veggies, some lentils, some pork products, some bread and some cheese. It was petite but tasty. Next time I might order the veggie version.

Then for the pizza. Just the regular pizza misto I think it’s called- tomatoes, basil and cheese. It was very good. HOWEVER I am proud to say that the ones I make at home are JUST AS GOOD! And this place gets constant rave reviews so, there you go. I’ll have to make mine for you sometime so come on over. We also had a cookie with gelato but we scarfed it too fast for me to take a picture of it.

After the pizza place we went to Paradox Lounge, which used to be my fave bar here. They have good martinis and fancy drinks but there are places closer by the house that make just as good or better so we hardly ever go there anymore. Anyhow we sat outside and I had a glass of wine instead of a fancy drink so I wouldn’t get sick!

DM had a fancy bourbon cuz he’s all trendy like that.

Other things that have happened recently.
The scene at our house most mornings. I make breakfast while DM and the cats enjoy the deck.

I made some bread. Farmhouse white. It was good but it would be better with better ingredients- apparently when you only have four ingredients in a recipe they really matter (duh, I guess). So instead of store brand bleached and processed all purpose flour I bought some organic bread flour for next time.

Anyhow it was good toasted with butter and apricot jam.

THEN I got on the “no knead bread” kick. Have you heard of this? I guess it was real trendy like three years ago. I of course have only heard about it recently. I split the recipe in half because I didn’t think my pan was big enough but it totally was so next time I’ll dump the whole thing into it so the bread is taller. It was really really good. You have to let it sit for like 20 hours before you cook it so it gets a sort of sourdough flavor and texture to it.

When I was in L.A. last month I went to breakfast with Eddie at The Nickel Diner.

We went because we wanted to try their bacon donuts. Yea, BACON DONUTS. Which were not nearly as awesome as they sound. But still, pretty good.

Eddie’s breakfast which is self explanitory.

My breakfast of creamy polenta with maple syrup and chicken apple sausage.