We recently went camping at Deckers which is about an hour to an hour and half from Colorado Springs. Lone Rock Campground to be specific. It was awesome. It’s not a very big campground and it wasn’t crowded on the day we went.  I reserved in advance online at ReserveAmerica so we got a site right on the river.  There were a few kids splashing around so Mike couldn’t fish right from the campsite. But they were very well behaved so it was fine.

Mike’s mom, step-dad, and uncle came out for the day bt it was so nice out there we convinced them to stay for the night.

I don’t like grungy old musty sleeping bags so I insist on bringing real bedding when we go camping and it is NICE.

So cozy inside the tent.

After the tent went up Linda and I put our feet int he water. Mike’s step-dad Paul actually went for a swim. We just watched.

Hanging out on the river.

Mike got in a little fishing before dinner. Paul took these pictures.

When we first got there it was raining. We weren’t sure if it would keep raining so we unpacked everything and put it under thw canopy. It did eventually stop raining and was beautiful! But we didn’t really bother to move the stuff. It wasn’t very organized!

Mike’s parents brought their cute little dog with them. They also had a tent and a sleeping bag in the back of their car like true Coloradoans, so when they decided to stay the night, it was pretty easy.

So I know it’s the big trendy thing to cook big, elaborate fancy meals when camping these days, and I’ve done that. But now I’m more into a retro thing — hot dogs, hamburgers, s’mores, that sort of thing. I did make some marinated feta before we left, tho. Just a block of feta, olive oil to cover, and some herbs from my garden. It was super good.

Mike is always dismayed when I want to bring the cast iron camping. But it’s the only way you can do this! Like oldey timey cowboys or pioneers or something.

Cooking over an open fire is the best.

I prepped all the confetti corn stuff ahead of time so I just had to toss it into the pan and cook it when I got there. The beans were from a can. They were delish! We also roasted hot dogs over the fire. Retro! 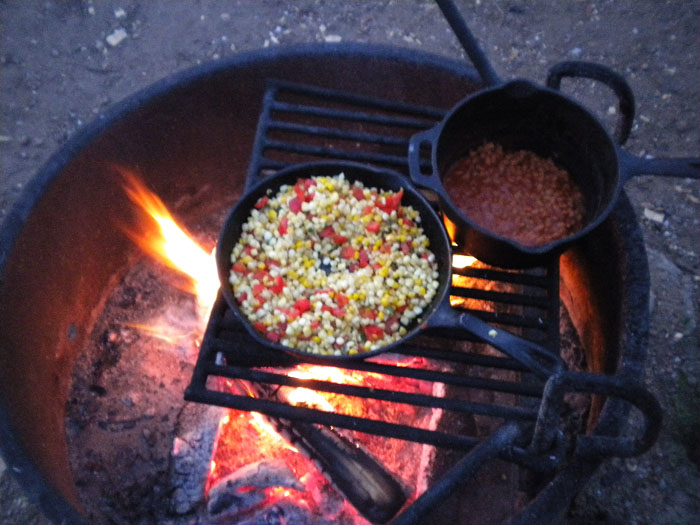 Later when it got dark we had s’mores and looked at the stars. It was during a meteor shower so we had a great show!

We’re definitely going to go camping here again next year. We’ll make reservations in advance again (you don’t have to, they do have walkups available) so that we can get a riverside site. Maybe we’ll bring some more people- you guys want to come?

All kinds of Colorado Springs Things