Friday I took my nephews on four mile bike ride to the ice cream stand and back. It was really hot so we had strawberry milkshakes when we got there. 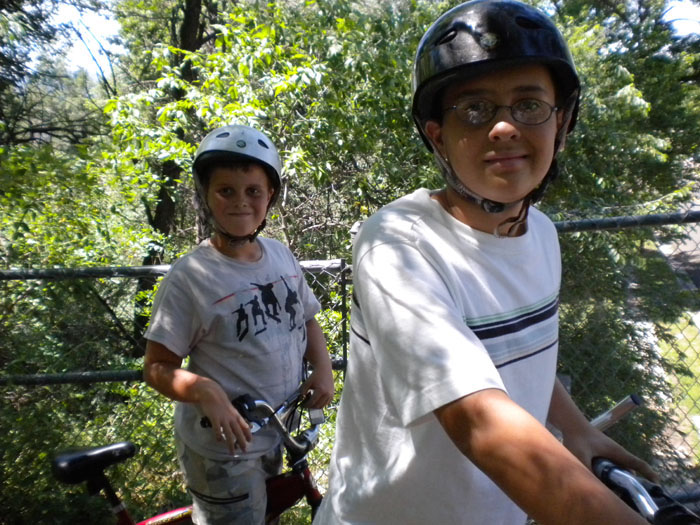 We had to hurry to get back because we were headed to the Cog Railway that goes to the top of Pikes Peak.

My parents live in a town where if you take a picture of yourself in an unusual location holding the local newspaper, they’ll publish that picture in the newspaper. So that’s why there’s always a newspaper in these pictures!

My brother wanted to drive his Bronco up to the top. So he took his son and DM with. They had car trouble on the way up and they arrived JUST as we were about to get back on the train to go back down. Since I wasn’t there, here’s DMs recap of the car trouble, in typical DM style:

“So T7’s brother, his kid Red, and I drove this thing up Pikes Peak. At some point, the transmission goes out, or so we think, so we turn around and coast back down a little ways until people start shouting at us and parts are falling off under the car and onto the road. Transmission? No, no, it’s the axle. The motherfucking AXLE is coming out of the car and the wheel is like a foot-and-a-half away from the car at this point. Well, I just figured the car was broken beyond repair and we were going to have to call a salvage yard to come get it. But holy shit, T7’s brother just jacked up the car and shoved it all back together. And in the true can-do spirit of the American West, we turned that Bronco around and conquered that hill. Where would we be today if the pioneers had gone home when things got rough? The U.S. would end at Kansas. We are pioneers. And survivors.”

DM: Like other pioneers did when they reached their destinations, we parked the car and ate donuts.

Then we ate donuts- the donuts from the top of Pikes Peak are oddly famous.

Then we took more pics. There’s that pesky newspaper again!

DM took these pics on the way back down the mountain.

DM: Death at every turn.

DM: Red holding up the rear, checking periodically overboard to make sure the tire’s staying on. “How’s that tire looking, Red?” “Still on!” “Good.”

DM: You’re seeing this right: This is not an invisible door. No, there’s no door at all. All you sissies can have all the doors you want on your cars. Me, I’m going doorless from now on. (Unless it’s a DeLorean or Lamborghini, with doors that open in a cool way.)

After all the excitement of the day we had drinks and dinner at Phantom Canyon. Kid was drinking their homemade root beer. Yum

I had a heffeweizen- sorry, I can’t spell it and I’m not going to look it up.
More later!

A nice fall day in Penrose, Cañon City, and Florence