Skip to content
So when we picked up the RV on Tuesday we still didn’t really know where we were going to go.

We sort of wanted to go up to Yellowstone but it seemed pretty far and a lot of driving for the time we had. It also was going to be pretty cold. In fact, a lot of this area was going to be cold.

We were unaware that when it gets to 32 degrees you’re not supposed to use the water or waste in an RV or the tanks could freeze. The RV people are very severe about this — of course they didn’t mention anything about this on the website or when I made the reservations … for Colorado … in October. There’s really no point to having an RV if you can’t use the sinks or toilet.

So we constantly looked at the weather on our phones and tried to skirt around any really cold spots.

At first Telluride and Durango were out because it was going to be raining and freezing. So we headed north and west. Our first stop was Glenwood Springs, CO. We got in really late and didn’t feel like fussing with a campground so we stayed overnight in a Walmart parking lot with three or four other RVers. Classy. Since we had no electricity and no heater, we both woke up at like 7:00 freezing to death! So we started the car and turned on the regular heat, drove to McDonald’s and had coffee and Egg McMuffins to warm up.

I had remembered that Glenwood Springs is an oldey timey spa town from Victorian times. They have these vapor caves there that the Indians used to use when they were up in that area.

We figured since the caves were heated naturally with 125 degree water from underground springs that we could probably get warm that way. It was reallly awesome. Like a steam sauna but in a cave. There were only a few other people there so we had a whole “room” to ourselves. One guy was sitting in a yoga pose in one of the caves. I guess he was meditating. You go down there for 10 minutes at a time, and upstairs to the deck or solarium and drink water in between. It really wasn’t that cold by then because in between we hung out on the deck.

But before the vapor caves, since it was still so early and they didn’t open till 9 a.m., we took a bike ride. We parked in front of the caves and rode into the little town of Glenwood Springs, just a few blocks away. Stopped into a cute cafe called Sacred Grounds and had some coffees. At some point we’ll probably go back and stay at Glenwood Hot Springs and Lodge which is right across the street from the vapor caves.
We would have loved to go in here for a drink but it was not even 9 a.m. yet and that’s too early, even for us.

After the caves we drove an hour or so to Rifle, CO. We were still pretty much at a loss for what to do next. We had been camping at Rifle Gap before but I still wanted to go to Rifle Falls, which is way nicer.

We stopped and had some breakfast at the Base Camp Cafe then went to the visitors center.

The Colorado river runs right thru that area, so Mike did some fishing.

After the fishing we still didn’t have a clue about where to go so we went to that campground I had wanted to go to before. It’s right near some cool waterfalls and a rushing creek. The good thing about this time of year is that nothing is booked and you don’t need reservations. In summer that campground books months in advance.

The falls are pretty much right in the campground so there’s no big long hike to reach them. 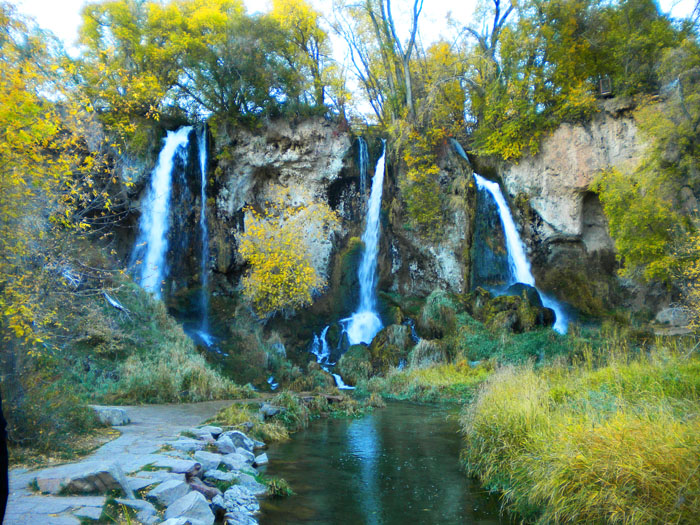 The next morning Mike went out and took some more pictures while I sat by the fire and had some coffee.