I forgot to post this one last week. I thought it was cute. It was really cold so we had a fire. More on the cold later.

A junky motel near our old house in junkytown. They tore down the motel and we’re hoping they don’t destroy the sign. Got some shots of it just in case.

We went apple picking in Penrose again this year. We went to this farm- Third Street Apples– two years ago so it may look familiar. The people who run it are super nice. The lady was afraid that the crazy freeze we had last week had ruined the apples that were still on the trees so she was selling them for .50 a pound- pick them yourself. She said we could taste them first, which we did and determined they were still delish- not ruined at all. So we bought like 5 pounds of them. I made apple crisp out of some of them and I might make a pie later this week if I have time. If you live nearby you should for sure go down there. Check their website for hours.

They also had chickens and this rooster who wouldn’t shut up. He’s cool looking, tho!

They also have a great pumpkin patch but we don’t need any pumpkins.

Couldn’t resist taking DMs picture with this crazy shaped one, tho.

We passed by an alpaca farm with the cuuuutest alpacas! I got out of the car to take their picture and they ran right over to me. They are super tame and totally adorable! As it turns out, the lady who owns it is the sister of the apple lady.

“You are one weird alpaca”

All my apples. I shined them up- there’s no wax or anything on them. I don’t think they’re organic but they’re about as fresh and local as you can get. Picked them myself!

That day we went to Coyote Coffee. DM wrote a post about that below. It was good. He had an Italian panini and I had a bowl of tortilla soup. We went there a couple weeks ago on our way to Phantom Canyon Road so I could get a coffee and it was so good and cute I wanted to go back.

We also went to Cy’s Drive In again. DM’s throat was sore cuz he has swine flu, so he wanted a milkshake. He has a review about it below, too.

Fall is definitely here (haha well, sorta). Everything is dead and full of leaves.

There was a nasty frost last week. It was actually an ice storm. We haven’t had an ice storm here since I’ve been here (we’re coming up on my fourth winter here) so I wasn’t really sure what it was all about or what was going on till it was too late. I brought my tomato plants under the covered porch and covered them with two layers of plastic which probably would have worked in normal cold conditions, but there was a freeze so they didn’t make it. Which bummed me out cuz they were doing so well!

The catnip made it, tho!

Not that I had a huge bounty of tomatoes or anything, but it would have been nice to actually be able to taste these.

I brought one of the plants in the house cuz it was small and fit on top of the fridge, so maybe I can get a few from it.

DM hung my shelves for me- the shelves are from a salvage place in Denver and the brackets are from the place we went to in Fort Worth last month. We hung one over the sink. This is lettuce, so we’ll see how it goes.

The rosemary isn’t doing so well.

The basil is dead and I have no idea why. The cat grass is doing great, of course. I even have a couple of cilantro sprouts.

This is a columbine plant that never flowered outside., In fact, none of them ever flowered but they’re still alive despite the frost. Interesting. We’ll see.

We hung the other shelf in front of the other window. This is basil, thyme, mint, dill, and oregano (volunteer oregano!).

This morning we worked on cleaning up some of the leaves, getting rid of the dead plants, and putting the pots away. Not very pretty but it’s not planting season. There are some plants that will live thru the winter but I’m going to LA for all of November and December. DM is coming with me for most of that time, too so there won’t be anyone to take care of them. I’ll just start my summer plants eariler next year!

Our apartment is decent sized- about 900 sq feet. But this room (the largest room in the house) is pretty much useless. The pool table is fun, but we hardly ever play it. I use it for laying out my samples, and outfits and stuff for my photo shoots, and as you can see, all the photo shoot stuff fits great underneath it. I just keep thinking there’s a better use for this space. I mostly posted this so I could think about it some more. Or maybe other people might have ideas. I don’t want to have to by a bunch of furniture for it and I don’t want to have to find a place for all the photo shoot stuff, tho! 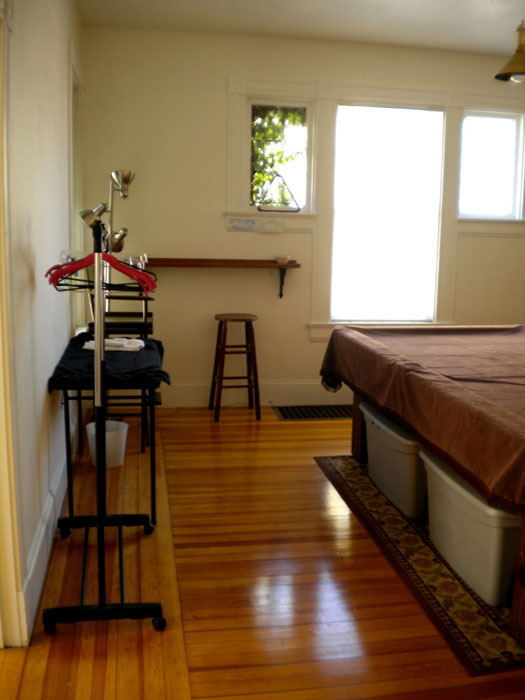 Just a couple of random kitchen shots. I sure have managed to clutter it up!

It was 80 degrees yesterday so we went to see the Big Cats Of Serenity Springs aka The Serenity Springs Wildlife Center. You’re not allowed to post pictures or use them for commercial purposes, which I don’t think I’m doing here. I guess if I am they’ll let me know! Some of these were taken by DM and some by me. His came out way better than mine did.

Anyone who has a house cat will recognize this pose.