‘Nuf Said. Click the pictures for the restaurants websites.

Did you need to see them up close?

I’d never heard of Paczki Day before I moved to Chicago. Well, it’s today! It’s another pre-Lent celebration like Mardi Gras.  But unlike Mardi Gras, Paczki Day involves doughnuts. Puffy, filled doughnuts. Doughnuts were made to use up all the flour, butter, and sugar before Lent. It’s a Polish thing, and we have lots of Polish people here in Chicago. But you can get paczki everywhere, not just in Polish bakeries. We got some on Sunday at an Austrian Bakery. I am sorry to say that I didn’t really like them. Mike did, he ate all three! We also had breakfast at the bakery, I had a waffle, and it was delicious. So maybe I just don’t like paczki. But I’m going to give it another try- there are tons of doughnut shops and bakeries around here, I’ll just go get some more somewhere else. According to wikipedia, there are other kinds of paczki- more like regular doughnuts. I don’t think the kind of doughnut you eat on Paczki Day is all that important, what’s important is that you eat doughnuts.

In September my parents and my brother and sister-in-law came to visit. We did a lot of tourist stuff, since we were practically tourists ourselves back then. We ate a ton of good food and saw a lot of stuff, too.

They stayed at The Aqua. It’s new and really cool. There is a hotel, condos, and apartments. They rented a condo on the 40th floor. 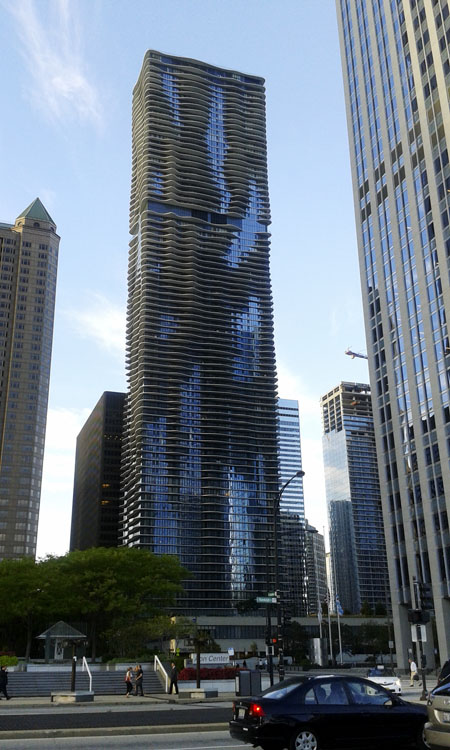 The Aqua Building was designed to look like water.

Sunday we had lunch in our tiny apartment and dessert on the roof deck, then we walked from our apartment in Lincoln Park through the zoo and down into the Gold Coast and had dinner at Gibson’s Steakhouse, which was awesome.

The tigers at the Lincoln Park Zoo.

The fam in Lincoln Park.

David and Sarah relaxing outside at The Aqua.

On Monday we took a tour with the Chicago Trolley and Double Decker Company. It was actually really fun and informative. Highly recommended.

We sat on the top of the double decker and got some good pictures.

Since the tour is “hop on, hop off” and there are designated spots to do this, we opted to get off on Taylor St. and go to Rosebud for lunch.

We are serious about lunch.

My dad had the Penne Bolognese (it was delicious). We "shared" it.

Mike had the Spaghetti and meatballs (it was delicious).

I had this insane thing: Cavatelli Ala Rosebud. I still dream about this dish. It was one of the best things I've ever eaten. My dad and I were supposed to share it but I wound up scarfing most of it myself. It's basically a gnocchi-like pasta with grean beans, tomatoes, peppers, and a butter sauce. OMG.

After lunch we got back on the trolley and finished the tour. Later that night we went to the John Hancock Building’s Signature Room and had drinks and checked out the view from the 95th floor.

Fancy cocktails at The Signature Room.

Tuesday we started out at Big Star in Wicker Park. The service was sort of lame and we felt like they weren’t that thrilled to have us non-hipsters out on their patio for everyone to see, but the food was really good. The margarita was not great, though, and overall we like Taco Joint in Lincoln Park better.

The margarita was warm and didn't taste like anything special. Plus it was small.

Another delish taco and really good beans- which were attacked by the family before I even got a good picture.

Yet another tasty little taco and the blah margarita. No matter how many pictures I take of it, it isn't going to improve. You can see how everyone else devoured their food.

Then we got on the El to Wrigleyville and wandered around there for awhile.

Mom and dad on the El platform.

Chicago wore them out!

We thought about taking a tour of Wrigley Field but the tickets were $25. REALLY? Yeah. Then we had some cocktails at one of the many bars up there.

After the drinks we got back on the El and went down to Fullerton in L.P. and had some hot dogs at Chicago’s Dog House.

The 'rents at Chicago's Dog House.

All the yummies at Chicago's Dog House.

Later that evening we took an architectural river cruise with the Chicago Architecture Foundation.

Some cool shots from the boat.

After the river tour we had drinks and apps at Filini. I had another of my favorite foods ever there.

One of the best things I've ever eaten: the mushroom pizza from Filini, Chicago.

Wednesday was their last day in Chicago so we started out in The Loop at Do-Rite Donuts. Everyone else was food-ed out, but Mike and I enjoyed the donuts very much. Rookies!

Then we just hung out in Millenium Park and had lunch at Mariano’s, the neat grocery store/cafe/restaurant by The Aqua.

Sarah and Dave at "The Bean".

Sarah and Dave at "The Bean".

These shots are irresistible.

These shots are irresistible.

Some of you might have noticed that we like to eat. For a lot of people, eating is something they do to stay alive. They call it a necessity.

But for us, eating is a hobby.

Lucky for us, Chicago has a few places to indulge us. We’ve been pretty busy, and we’ll talk about some more of these in greater detail later, but for now, here’s a list of some of this city’s amazing food offerings we’ve enjoyed:

So much food in this town — how do people here ever get anything done?

If you're after treats, Bobtail is also an excellent choice.

What's this? A hot dog? Yes, I guess so. Underneath the french fries, anyway. Interesting technique, Red Hot Ranch.

The S'mores cake at The Edge. Cake did not last long.

Carrot Cake! At the Bourgeois Pig.

We don't only take pictures of food. We are also capital-A Artists. Or, maybe this is the view after we'd eaten too much and had to lay on the floor. Hard to say.

We love Dogtooth Coffee Company. They close at 6pm in the winter which is kind of lame, but everything else is awesome.

They have a patio, where you can sit AND bring your dog.

They have delicious espressos and other drinks.

Their food is really good, especially their sandwiches.

And they have the best gelato in town. Even better than places that just sell gelato!

Anyhow, here are some pictures so you can see what I mean.

Enjoy a latte and a donut on the patio at Dogtooth Coffee Company, Colorado Springs

Or if it's too cold, enjoy it inside- they have nice big tables and cushy chairs.

So go there. And let us know what you think!