We enjoy the music of The Mitguards a great deal, and they’re playing Saturday night at Poor Richard’s. If you’re downtown, it’s worthwhile to stop in for a listen. The show is free and starts at 7:30 p.m.

From their website: “The Mitguards bring a unique and non-traditional perspective to folk music, combining sharp, insightful lyrics with haunting melodies and flawless harmonies. Roots-based Americana takes on a new, Southwestern air in the talented hands and voices of Deb and Chris Mitguard.” 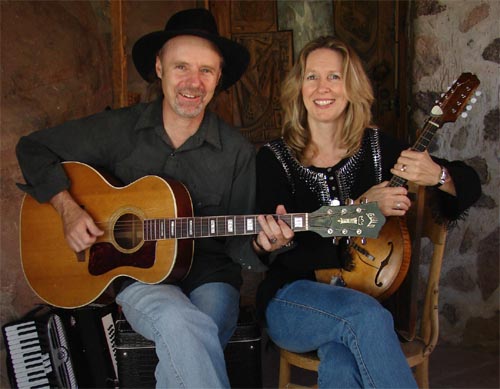 The Mitguards are playing Saturday at Poor Richard's.

Also, if you’re downtown, the new 7-Eleven opened today at Pikes Peak and Tejon! You probably need a beverage or a magazine.

The Mitguards performed at Rico's a few weeks ago.

Paul enjoyed an Anchor Steam beer at Rico's. Mom had a pinot grigio, and I was adventurous and tried the Bourbon Barrel Stout. I will probably have to try it again.

We haven't come close to trying all of the food and drink at Rico's. We're on our way, though. This is the Peppermint Patty (hot chocolate with peppermint schnapps) and a shot of Stranahan's Colorado Whiskey.

You'll want to save room for dessert. We shared the chocolate sundae. Jealous?